Coming up next in the Early Canadian Literature series published by Wilfrid Laurier University Press: a new edition of S. Douglass S. Huyghue’s 1847 book Argimou: A Legend of the Micmac, with an afterword by Gwendolyn Davies, to be published in April 2017!

Both an adventure-laced captivity tale and an impassioned denunciation of the marginalization of Indigenous culture in the face of European colonial expansion, Douglass Smith Huyghue’s Argimou (1847) is the first Canadian novel to describe the fall of eighteenth-century Fort Beauséjour and the expulsion of the Acadians. Its integration of the untamed New Brunswick landscape into the narrative, including a dramatic finale that takes place over the reversing falls in Saint John, intensifies a sense of the heroic proportions of the novel’s protagonist, Argimou.

Even if read as an escapist romance and captivity tale, Argimou captures for posterity a sense of the Tantramar mists, boundless forests, and majestic waters informing the topographical character of pre-Victorian New Brunswick. Its snapshot of the human suffering occasioned by the 1755 expulsion of the Acadians, and its appeal to Victorian readers to pay attention to the increasingly disenfranchised state of Indigenous peoples, make the novel a valuable contribution to early Canadian fiction.

Situating the novel in its eighteenth-century historical and geographical context, the afterword to this new edition foregrounds the author’s skilful adaptation of historical-fiction conventions popularized by Sir Walter Scott and additionally highlights his social concern for the fate of Indigenous cultures in nineteenth-century Maritime Canada.

I’m pleased to announce the publication of the seventh volume in the Early Canadian Literature series published by Wilfrid Laurier University Press: Christine van der Mark’s In Due Season (1947), with an afterword by Carole Gerson and Janice Dowson (Simon Fraser University).

First published in 1947, In Due Season broke new ground with its fictional representation of women and of Indigenous people. Set during the dustbowl 1930s, this prize-winning novel follows Lina Ashley, a homesteader who takes her family from southern Alberta to a new life in the Peace River region. Her daughter Poppy grows up in a community characterized by harmonious interactions between the Métis and the  European settlers. Still, there is tension between mother and daughter when Poppy becomes involved with a Métis lover. This novel expands the patriarchal canon of Canadian prairie fiction by depicting the agency of a successful female settler and, as noted by Dorothy Livesay, was “one of the first, if not the first Canadian novel wherein the plight of the Native Indian and the Métis is honestly and painfully recorded.”

The afterword by Carole Gerson and Janice Dowson provides information about author van der Mark and situates her book within the contexts of Canadian social, literary, and publishing history.

In The Forest of Bourg-Marie, originally published in 1898, Toronto author and musician S. Frances Harrison draws together a highly mythologized image of Quebec society and the forms of Gothic literature that were already familiar to her English-speaking audience. It tells the story of a fourteen-year-old French Canadian who is lured to the United States by the promise of financial reward, only to be rejected by his grandfather upon his return. In doing so, the novel offers a powerful critique of the personal and cultural consequences of emigration out of Canada.

In her afterword, Cynthia Sugars considers how The Forest of Bourg-Marie reimagines the Gothic tradition from a settler Canadian perspective, turning to a French-Canadian setting with distinctly New-World overtones. Harrison’s twist on the traditional Gothic plotline offers an inversion of such Gothic motifs as the decadent aristocrat and ancestral curse by playing on questions of illegitimacy and cultural preservation.

Originally published in 1935, Frederick Niven’s The Flying Years tells the history of Western Canada from the 1850s to the 1920s as witnessed by Angus Munro, a young Scot forced to emigrate to Canada when his family is evicted from their farm. Working in the isolated setting of Rocky Mountain House, Angus secretly marries a Cree woman, who dies in a measles epidemic while he is on an extended business trip. The discovery, fourteen years later, that his wife had given birth to a boy who was adopted by another Cree family and raised to be “all Indian” confirms Angus’s sympathies toward Aboriginal peoples, and he eventually becomes the Indian Agent on the reserve where his secret son lives. Angus’s ongoing negotiation of both the literal and symbolic roles of “White Father” takes place within the context of questions about race and nation, assimilation and difference, and the future of the Canadian West. Against a background of resource exploitation and western development, the novel queries the place of Aboriginal peoples in this new nation and suggests that progress brings with it a cost.

Alison Calder’s afterword examines the novel’s depiction of the paternalistic relationship between the Canadian government and Aboriginal peoples in Western Canada, and situates the novel in terms of contemporary discussions about race and biology.

These books can be purchased either in print or in epub format directly from the publisher or from your favourite bookseller.

I’m pleased to announce the publication of Gilbert Parker’s The Seats of the Mighty, the fourth volume in the Early Canadian Literature series published by Wilfrid Laurier University Press. The edition contains the complete text of the original 1896 edition, Parker’s introduction to the “Imperial Edition” of the novel, published in 1913, and a new afterword by Andrea Cabajsky, who is also part of the series’ advisory board. The book can be purchased either in print or in epub format directly from the publisher or from your favourite bookseller.

From the pen of Gilbert Parker comes one of the most popular Canadian novels of the late nineteenth century. First published simultaneously in Canada and the United States in 1896, The Seats of the Mighty is set in Quebec City in 1759, against the backdrop of the conflict between the English and the French over the future of New France. Written and published after Parker’s move to England, the novel attempts to romanticize French Canada without alienating his English and American readership. The novel’s enduring popularity led to a stage version in 1897 and a silent film in 1914.

The next two volumes in the series, S. Frances Harrison’s The Forest of Bourg-Marie and Frederick Niven’s The Flying Years, are scheduled to be published in June 2015.

I recently did a short email interview with Open Book Toronto, in which I discuss some of my editorial process for the Early Canadian Literature series published by Wilfrid Laurier University Press.

I’m pleased to announce the publication of the second and third volumes of the Early Canadian Literature series published by Wilfrid Laurier University Press: an edition of Nellie L. McClung’s 1925 novel Painted Fires, with an afterword by Cecily Devereux, and an edition of George Copway’s 1850 book The Traditional History and Characteristic Sketches of the Ojibway Nation, with an afterword by Shelley Hulan. Both can be purchased either in print or in epub format directly from the publisher or from your favourite bookseller.

Painted Fires, first published in 1925, narrates the trials and tribulations of Helmi Milander, a Finnish immigrant, during the years approaching the First World War. The novel serves as a vehicle for McClung’s social activism, especially in terms of temperance, woman suffrage, and immigration policies that favour cultural assimilation. In her afterword, Cecily Devereux situates Painted Fires in the context of McClung’s feminist fiction and her interest in contemporary questions of immigration and “naturalization.” She also considers how McClung’s representation of Helmi Milander’s story draws on popular culture narratives.

The Traditional History and Characteristic Sketches of the Ojibway Nation (1850) was one of the first books of Indigenous history written by an Indigenous author. The book blends nature writing and narrative to describe the language, religious beliefs, stories, land, work, and play of the Ojibway people. Shelley Hulan’s afterword considers Copway’s rhetorical strategies in framing a narrative as a form of “history, interrupted” for a non-Indigenous readership. 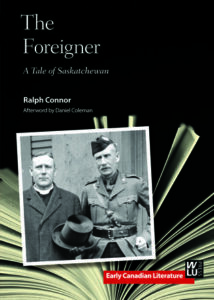 Wilfrid Laurier University Press released earlier this week their Spring–Summer 2014 catalogue, which includes the fourth and fifth books in the Early Canadian Literature series: Gilbert Parker’s The Seats of the Mighty, with an afterword by Andrea Cabajsky, and S. Frances Harrison’s The Forest of Bourg-Marie, with an afterword by Cynthia Sugars. These will be released later in 2014, after the publication of the first three books in the series, by Ralph Connor, George Copway, and Nellie L. McClung.

I am very pleased to announce the creation of the Early Canadian Literature series, to be published by Wilfrid Laurier University Press:

The Early Canadian Literature Series returns to print rare texts deserving restoration to the canon of Canadian texts in English. Including novels, periodical pieces, memoirs, and creative non-fiction, the series showcases texts by Indigenous peoples and immigrants from a range of ancestral, language, and religious origins. Each volume includes an afterword by a prominent scholar providing new interpretations for all readers.

I’m series editor, and the series is supported by an advisory board consisting of Andrea Cabajsky (Université de Moncton), Carole Gerson (Simon Fraser University), and Cynthia Sugars (University of Ottawa).

Several more titles are in preparation, and we warmly welcome suggestions for future titles.