Melissa Francis’s Lessons from the Prairie Coming Later This Month

Melissa Francis, who played a recurring role as Cassandra Cooper in the 1981–1982 season of the popular NBC series Little House on the Prairie, will be publishing a new book later this month, a follow-up to her 2012 memoir Diary of a Stage Mother’s Daughter: 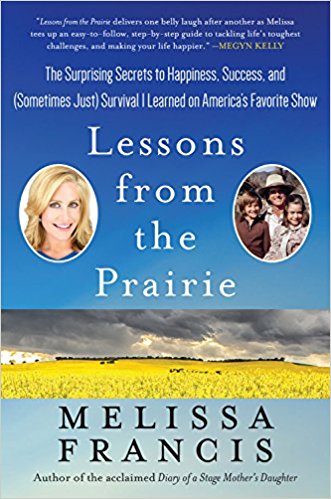 Melissa Francis was only eight years old when she won the role of a lifetime: playing Cassandra Cooper Ingalls on the world’s most famous prime-time soap opera, Little House on the Prairie.

Now in Lessons from the Prairie, she shares behind-the-scenes stories from the set, and lessons learned from the show’s dynamic creator, Michael Landon, that have echoed throughout Melissa’s adult life. With novel insights on hard work, making mistakes, and even spirituality, Francis shares inspirational and practical life lessons that will appeal both to her current TV fans, and fans of one of the most adored TV shows of all time.

Back in mid-January, TVShowsonDVD.com announced that the first season of Little House on the Prairie would be rereleased on DVD and BluRay, with sets expected to be available on March 25, 2014. In subsequent posts on that website, the project was briefly rumoured to be discontinued immediately before they posted the official press release and cover art. This announcement was followed a month later by news that the second season would be released in the same two formats a mere six weeks after the first season, on May 6, along with one or two additional posts with the second season cover art. Judging by the fact that the first season contains part one of a six-part documentary about the series, it seems pretty likely that the remaining seasons will follow at a steady clip, especially given that the pilot telefilm aired forty years ago on March 30, 1974, and that the ongoing series premiered forty years ago on September 11, 1974.

Comparisons between Little House on the Prairie and shows like Buffy the Vampire Slayer, Star Trek, and Dr. Who are obviously slight as far as content is concerned, but Little House remains in many ways a cult favourite: with all four shows, the line between “fan” and “fanatic” is often a blurry one. So the news about this DVD rerelease is exciting—perhaps literally breathtaking—for two reasons: first, because both the picture and the sound have been substantially cleaned up (apparently it looks even better than it did in 1974); and second, because unlike the first set of DVDs released a decade ago, these sets will contain the original network broadcasts. With a lot of older shows, the versions that become the basis for DVD sets are the ones that were made for syndicated reruns, which have to be trimmed to make room for more commercials. This means—wait for it—that each episode of Little House on these DVDs will contain two to three minutes of footage that I have never seen. With 205 episodes in total (including the two-hour pilot movie, three two-hour post-series telefilms, and a three-hour retrospective special), that’s four hundred to six hundred extra minutes. In total, that’s the equivalent of FIVE OR SIX NEW EPISODES.

Now, I’m not anticipating that we’re going to discover a new character who was ritually cut out of the syndicated versions or subplots that alter character development in a radical way. It’s entirely possible that the new footage in question consists almost entirely of establishing shots and bumpers, along with extra bits of dialogue that don’t add anything substantial to the content, or more extreme close-ups of Michael Landon crying. In other words, it’s entirely possible that the editors who trimmed the original broadcasts for syndication did so pretty judiciously, even though the way they did so (abrupt fades and cuts) is often jarring to watch.

The copy I ordered is still in transit and will take a while to get here, so I have a bit more waiting ahead of me. But I’m really looking forward to taking another look at a TV show that I’ve been watching, off and on, all my life. I like to think that, for me, revisiting these episodes with so much extra footage will be a lot like discovering a stack of extra photos of my family when I was a child that, for whatever reason, didn’t make it into my mother’s albums: familiar but new at the same time. In fact, I so much enjoyed writing about the pilot movie in my book Textual Transformations in Children’s Literature that this might be the opportunity I’ve been waiting for to write about the overall series in a more intentional way—not only to speculate about what made it an unexpected hit in the 1970s but why it continues to endure forty years later.

Pre-order Listing for Confessions of a Prairie Bitch

Amazon.com now has a pre-order listing for a memoir by Alison Arngrim called Confessions of a Prairie Bitch: How I Survived Nellie Oleson and Learned to Love Being Hated, scheduled to be published by It Books in late June 2010 (coinciding with the publication of Melissa Anderson’s memoir The Way I See It.

Pre-order Listing for Growing Up Mary

Amazon.com now has a pre-order listing for a memoir by Melissa Anderson, titled Growing Up Mary: A Memoir of Little House on the Prairie. The book is scheduled to be published by Globe Pequot on 15 June 2010. Looking forward to seeing it when it’s published!

UPDATED 16 DECEMBER 2009: Anderson’s book is now titled The Way I See It: A Look Back at My Time on Little House and has the following catalog description:

When other girls her age were experiencing their first crushes, Melissa Sue Anderson was receiving handwritten marriage proposals from fans as young, and younger, than she was. When other girls were dreaming of their first kiss, Melissa was struggling through hers in front of a camera. From age eleven in 1974 until she left the show in 1981, Melissa Anderson literally grew up before the viewers of Little House on the Prairie.

Melissa, as Mary, is remembered by many as “the blind sister”—and she was the only actor in the series to be nominated for an Emmy. In Growing Up Mary, she takes readers onto the set and inside the world of the iconic series created by Michael Landon, who, Melissa discovered, was not perfect, as much as he tried to be. In this memoir she also shares her memories of working with guest stars like Todd Bridges, Lou Gossett, Jr., Mariette Hartley, Sean Penn, Patricia Neal, and Johnny Cash.

In addition to stories of life on the set, Melissa offers revealing looks at her relationships off-set with her costars, including the other Melissa (Melissa Gilbert) and Alison Arngrim, who portrayed Nellie Oleson on the show. And she relates stories of her guest appearances on iconic programs such as The Love Boat and The Brady Bunch.

Filled with personal, revealing anecdotes and memorabilia from the Little House years, this book is also a portrait of a child star who became a successful adult actress and a successful adult. These are stories from “the other Ingalls sister” that have never been told.

Melissa Gilbert’s memoir Prairie Tale will be published by Simon & Schuster on 7 June 2009!

A fascinating, heartbreaking, and ultimately uplifting tale of self-discovery from the beloved actress who earned a permanent place in the hearts of millions when she was just a child.

To fans of the hugely successful television series Little House on the Prairie, Melissa Gilbert grew up in a fantasy world with a larger-than-life father, friends and family she could count on, and plenty of animals to play with. Children across the country dreamed of the Ingalls’ idyllic life—and so did Melissa.

She was a natural on camera, but behind the scenes, life was more complicated. Adopted as a baby into a legendary show business family, Melissa wrestled with questions about her identity and struggled to maintain an image of perfection her mother created and enforced. Only after years of substance abuse, dysfunctional relationships, and made-for-television movies did she begin to figure out who she really was.

With candor and humor, the cherished actress traces her complicated journey from buck-toothed Laura “Half-pint” Ingalls to Hollywood starlet, wife, and mother. She partied with the Brat Pack, dated heartthrobs like Rob Lowe and bad boys like Billy Idol, and began a self-destructive pattern of addiction and codependence. Left in debt after her first marriage, and struggling to create some sense of stability, she eventually realized that her career on television had earned her popularity, admiration, and love from everyone but herself.

Through hard work, tenacity, sobriety, and the blessings of a solid marriage, Melissa has accepted her many different identities and learned to laugh, cry, and forgive in new ways. Women everywhere may have idolized her charming life on Little House on the Prairie, but Melissa’s own unexpectedly honest, imperfect, and down-to-earth story is an inspiration.

Other Biographies and Memoirs